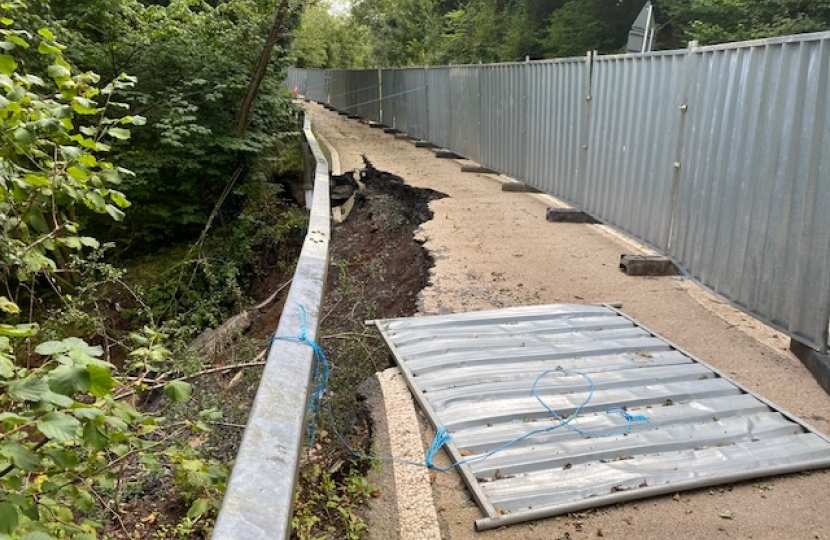 Almost a year since the A479 Trunk Road between Talgarth and Crickhowell was closed as a result of flooding and a landslide, Fay Jones MP has welcome news from Welsh Government Highways that work will resume on Monday 1 February with a view to re-opening the road in the spring.

Following a landslide in February 2020, the road was closed to allow repair works to be carried out. At the time, it was estimated that the repairs would be completed and the road would be reopened by November 2020.

Since the closure of the A479, Miss Jones has received numerous complaints from constituents about the disruption the road closure is causing. Constituents have complained that the detour can add up to half an hour onto their journey, with some saying that it has added over 150 miles to their weekly commute.

Miss Jones has written to the Welsh Government on a number of occasions to resolve the situation.

"This news will be a huge relief to those living on the alternative routes, official and ‘unofficial’, to learn that at long last the necessary paperwork is complete and the contractor can now get on with the job of re-opening one of the main roads through mid Wales, allowing the businesses and residents affected by the closure to look forward to a return to normality.

"I have been in touch with many residents of Talgarth, Pengenffordd, Trefecca, Cathedine and Llangorse during the closure period and recognise that when the A479 is open again we then need to make certain that the substantial damage that has been caused to road surfaces, drainage and hedge banks on the diversion routes is repaired satisfactorily and speedily.

"Please be assured that I will continue to be in touch with the Welsh Government Minister responsible for Trunk Roads until the A479 is open and residents’ concerns are fully resolved. To that end, if you have anything that needs attention as a result of this lengthy interruption to ‘normal service’, please don’t hesitate to get in touch."