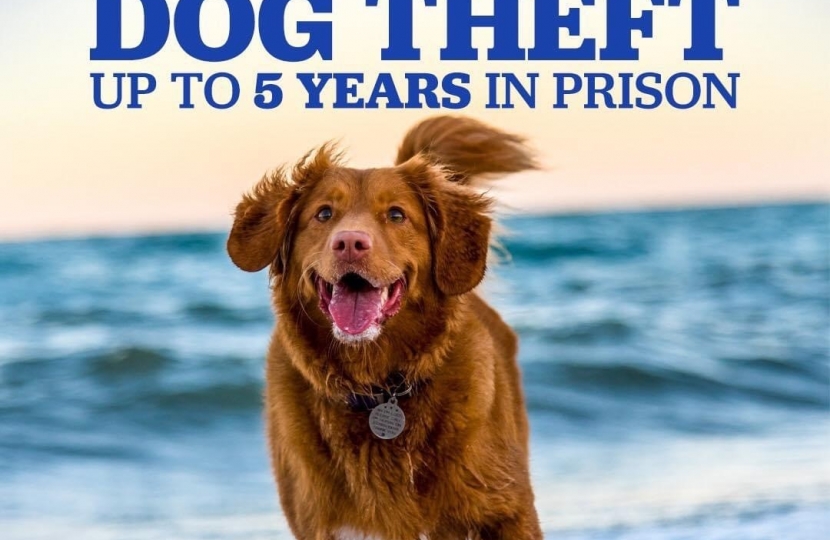 Fay Jones MP has welcomed the new amendment to the Government’s Animal Welfare (Kept Animals) Bill, making it a criminal offence to steal dogs. Dog theft criminals who steal much loved pets will face up to five years behind bars.

The dog abduction offence, announced in September by Defra, will be added by the Government to the Kept Animals Bill, bolstering the raft of measures it already includes to further protect pets, livestock and kept wild animals.

Prior to this new offence, pet theft was treated as a loss of property to the owner. This new offence will take into account the emotional distress caused to both the owner and the dog and will help judges’ ability to hand down more targeted penalties and sentences for pet thieves. A provision will also be made in the Bill to extend the offence to other pets in the future, should evidence support this.

By introducing this offence, the Government is following the recommendation of the Pet Theft Taskforce, launched in May 2021 to tackle a reported rise in pet thefts during the pandemic. Evidence shows that more than 2,000 incidents of pet theft were reported to the police last year, causing considerable distress for owners and their pets alike. For crimes recorded by police in which animals are stolen, around seven in 10 involve dogs.

“As a dog owner I am thrilled the Government have introduced these amendments as well as tightening welfare standards.  The current law does not take in to account the emotional distress of losing a pet – and this legislation sets a tough punishment for anyone who would steal a beloved family pet.

With so many more puppies after lockdown, it is essential that a clear threat is laid down to those who would try to steal a dog.”