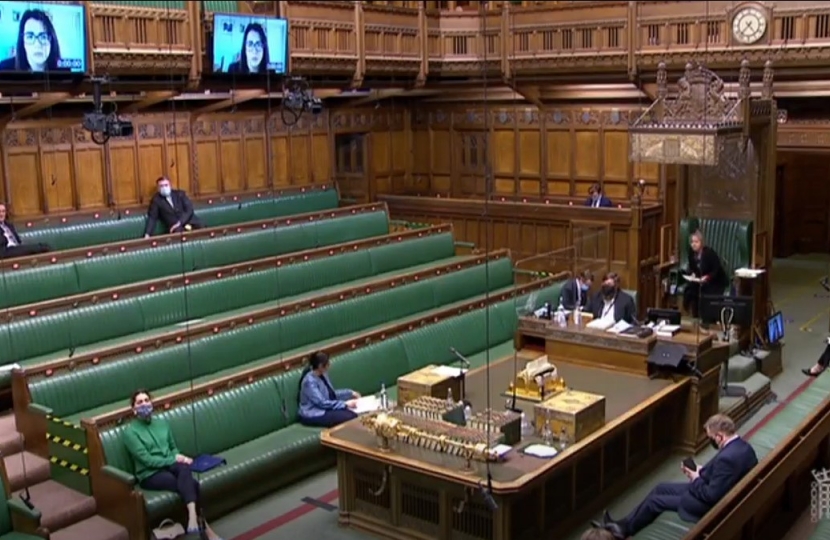 Today in Parliament, Fay Jones MP criticised the policing of the vigil for Sarah Everard on Clapham Common, but also raised concerns that the vigil was turned into a protest by those who would “seek to defund the police and destabilise our society”.

During a Ministerial Statement on the policing and prevention of violence against women from the Home Secretary, Miss Jones paid tribute to Sarah Everard, sending her heartfelt condolences to Sarah Everard’s loved ones.

Miss Jones expressed her shock at the way in which Saturday night’s vigil was policed. Having seen images and videos of police dispersing the gathering, Miss Jones stated “the situation demanded sensitivity and compassion – something which was evidently lacking”.

Despite her criticism of the police, Miss Jones voiced concern that what began as a peaceful and important vigil for Sarah Everard held on Clapham Common, turned into a protest. Miss Jones pointed to photographs of the vigil showing protestors holding ACAB — “all cops are b*****ds”— signs.

Miss Jones argued that the murder of Sarah Everard risked being hijacked by those who would seek to defund the police and destabilise our society, ultimately making it even harder for women to come forward and report assaults. Miss Jones went on to ask the Home Secretary for assurance that nothing will deter the Government from delivering stronger legislation to protect women and girls from harm.

Responding to Miss Jones, the Home Secretary insisted that the UK Government would continue to do everything in their strategies, policies and laws going forward to protect women and ensure that they are safeguarded in the right way.

Speaking of the incident on Clapham Common, the Home Secretary said “We will wait for the report. There is no question but that where there are lessons to be learned, they will be learned. Where individuals were acting inappropriately, in the way in which she said, that will also be subject to some consideration.”

“Like many women, I have been heartbroken, angry and horrified by the news of the murder of Sarah Everard over the past week. First and foremost, my thoughts are with Sarah’s family and friends – I cannot comprehend the loss they are feeling.

“The scenes of police removing and arresting women on Clapham Common were distressing, and there are certainly questions for the police to answer. I welcome the independent review of the police operation which is being carried out and I hope lessons will be learnt.

“Equally, Sarah Everard’s tragic murder should not be politicised by groups who seek to defund the police and destabilise our society. Condemning all police officers as ‘b*****ds’ is offensive, inaccurate and completely unproductive.

“Ultimately, we must always remember that it should not be normal to keep keys clenched in your hand when walking home, or in my case, keeping an open phone line to my mum until she heard the front door shut. Women should not need to change their behaviour to stay safe; they should not be threatened to start with.

“Having sat on the Domestic Abuse Bill committee, I know that the Government is determined to take robust action to protect women and girls from violence.  I’m extremely pleased to see that the consultation into Violence Against Women and Girls strategy has been reopened and that it has been deluged with over 78,000 contributions since last week.

"Action must be taken to address violence against women, and I am pleased that the Home Secretary is committed to doing so in strategies, policies and laws.”