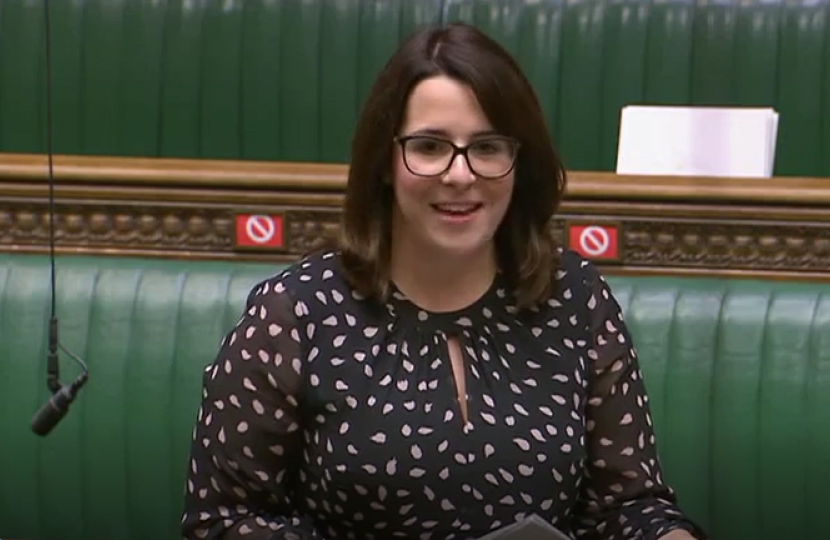 Yesterday, Fay Jones MP held an Adjournment Debate on ‘Government Support for Women’s Rugby’ highlighting the growth of women’s rugby in recent years and the benefits of women participating in sport.

Across the world there are now over 2.7 million registered women rugby players, making up over a third of all rugby players in members unions. In Brecon and Radnorshire alone, there are multiple women’s rugby teams, including Gwernyfed RFC and a Female Rugby Hub called Red Kites, which provides the opportunity for 6-18-year-olds to play girls-only rugby.

Fay Jones herself, took up playing women’s rugby when she was at university, proudly played tighthead prop for King’s College for four years. In her third year, Miss Jones spent a year teaching English in France and so, to make friends, she joined the Gourdon rugby team, again playing in the women’s first team. Speaking about her time playing she said, “I thoroughly enjoyed every moment playing rugby, even the occasional bruise and graze, and especially the social aspect of the team.”

Miss Jones used her speech to highlight the lifelong benefits of sport for everyone who plays, from teaching work ethic and providing health benefits, to increasing confidence and establishing a sense of community. With women still 20% less likely to participate in team sports than men and boys, Miss Jones stressed that she would like to see more women benefitting from the transformative rewards of sport.

Prior to coronavirus, over the past decade women’s participation in team sport had been on an upward trajectory. Given the progress which has been made, Miss Jones stressed her concern that 42 per cent of women compared to 35 per cent of men reporting a drop in activity levels during lockdown. With rugby unions and other national sporting bodies alike, tightening their belts due to the financial impact of the pandemic, Miss Jones raised concerns that women’s sport could be hard hit at a time when sporting bodies and Government should be encouraging women to get back into sport and exercise.

“When I began playing rugby at university, we were in a tiny minority and were seen as women playing a man’s game. That is far from true now, so let us not see all the progress we have achieved in recent years be undone due to coronavirus and the resulting financial squeeze.

“While I welcome the much-needed funds being made available for sport across the UK, we must fund the change we want to see in the sport. As we recover from COVID-19, we should be aiming to increase the participation of women and girls in sport, the accessibility of women’s sport and its visibility. At the very least, we should not be prioritising men’s sport over women’s.

“Even after such a positive debate, I still had people tweet me saying that I was delusional putting women’s rugby on a par with men and that women’s involvement in rugby was ‘a joke’. Opinions like these are precisely why we need to continue having this discussion; to bust these stereotypes and increase women’s participation in sport.

“The benefits of playing sport are well documented. I want more women to experience these benefits, just as I myself did when playing rugby.”

You can watch the full Adjournment Debate here.

An all too real issue being faced across this constituency, particularly by farmers is uncertain times and in what can be a lonely profession.  I will work to ensure we have access to Mental Health services, with quick interventions and funding for long term solutions.