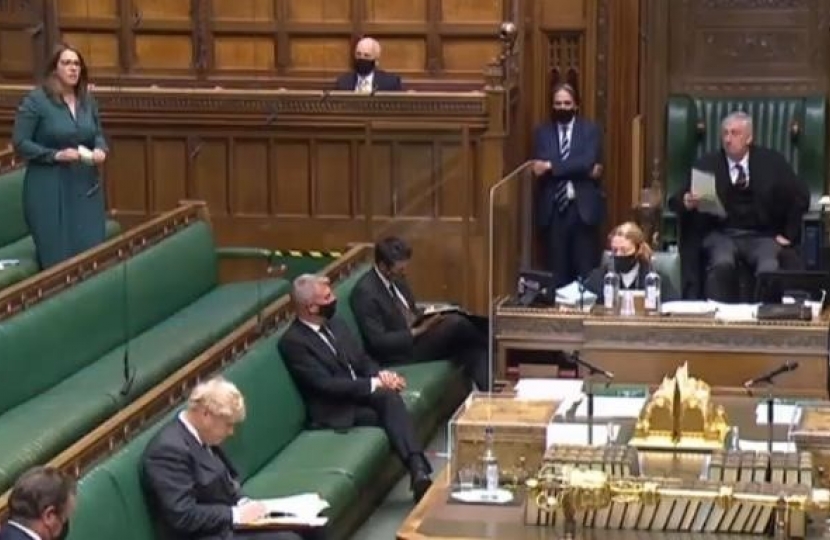 At Prime Minister’s Questions, Fay Jones MP called on the Welsh Government to reconsider its proposed Nitrate Vulnerable Zone, which she described as ‘slap in the face’ to local farmers.

Miss Jones and her Conservative colleagues in the Welsh Parliament have been campaigning against the introduction of a Wales-wide Nitrate Vulnerable Zone which is being introduced contrary to the advice of the regulator Natural Resources Wales.

Miss Jones also raised a serious question over the role of the water companies after the BBC Panorama documentary last week showed thousands of tonnes of sewage being dumped in rivers illegally.

In his response, Prime Minister Boris Johnson said that Ms Jones was absolutely right and joined her in calling on the Welsh Government, to whom environmental policy is devolved, to back our hardworking agriculture sector.

The Prime Minister suggested that if her constituents wanted to send a clear signal and to see a change in the way that farmers are treated by the Welsh Government then they will vote for the Conservatives in the upcoming Senedd elections.

"Securing a question at Prime Minister’s Questions is a rare event and I was delighted to have the chance to share my constituents’ frustrations with the NVZ policy.  It is a disgrace that the  Welsh Labour and Lib Dem Government would rather denigrate our hard working farmers, instead of tackling other sources of river pollution  such as the water companies who have been illegally dumping untreated sewage into rivers, as exposed by BBC Panorama last week.

"After working tirelessly throughout the pandemic to provide world class produce, it would be a slap in the face for our farmers if the Labour/Lib Dem Welsh Government were to maintain this policy, given the damage it will cause to our farming sector.

"Water quality needs a comprehensive, ambitious approach – not a lazy, one size fits all policy.

"The Liberal Democrats had the opportunity to vote this down but chose not to.  They claim to be against this policy but their actions speak louder than their words.

"The Prime Minister is right to urge my constituents to make their views heard at the ballot box on 6th May, where there is only one party that will stand up for Welsh farmers."