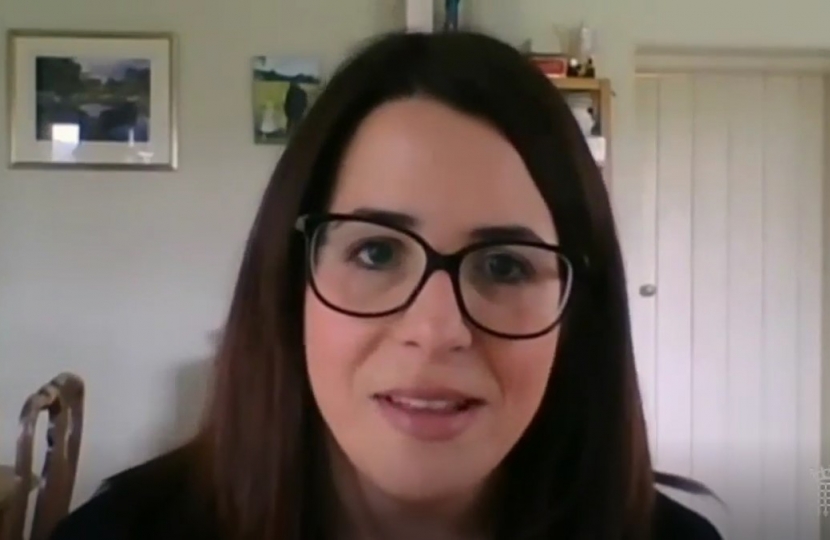 During Wales Questions in Parliament, Fay Jones MP welcomed the creation of a Levelling Up Fund and asked for confirmation that it could be used to improve broadband in rural Wales.

Brecon and Radnorshire is well below the UK average when it comes to broadband connectivity, with 5.7% unable to receive decent broadband and 21.5% receiving below 10Mbps.

Miss Jones has been campaigning to improve broadband and mobile coverage in Brecon and Radnorshire since her election in 2019. She has raised the issue a number of times in Parliament and has been working on individual cases helping residents in Brecon and Radnor access broadband improvements under the Universal Service Obligation.  She has also worked to create a Community Fibre Partnership just outside Crickhowell.

Speaking via video link Miss Jones said she was delighted to see so much in the Budget for Brecon and Radnorshire particularly the Global Centre of Rail Excellence which is being built in Coelbren.

Miss Jones went on to point out that rural areas like Brecon and Radnorshire are still plagued by lack of broadband and mobile coverage, and asked Wales Office Minister, David TC Davies MP to confirm that the levelling up fund would make a genuine difference to structural problems like lack of connectivity.

Responding to Miss Jones, the Minister said that he expected the Levelling Up Fund can be used to invest in community infrastructure across the board. He also pointed to the UK Gigabit Programme which will invest £5 billion in helping to build gigabit-capable networks in the hardest to reach areas of the UK by the end of 2025.

“It will come as no surprise to residents that Brecon and Radnorshire has long been bottom of the league table when it comes to digital connectivity. While that isn’t good enough at the best of times, the pandemic has thrown digital connectivity into sharp focus, with more people than ever working from home and businesses relying on the internet to reach their customers.

“I welcome the extension of the Levelling Up Fund from England-only to UK-wide. This will allow the UK Government to directly invest in town centre and high street regeneration, local infrastructure, and heritage projects in Wales.

“The UK Government continues to demonstrated its commitment to levelling up broadband across the United Kingdom with schemes like the Gigabit Programme. I’m pleased that progress is in the pipeline for our beautiful corner of the world, but I will continue to push the UK and Welsh governments to do more.”