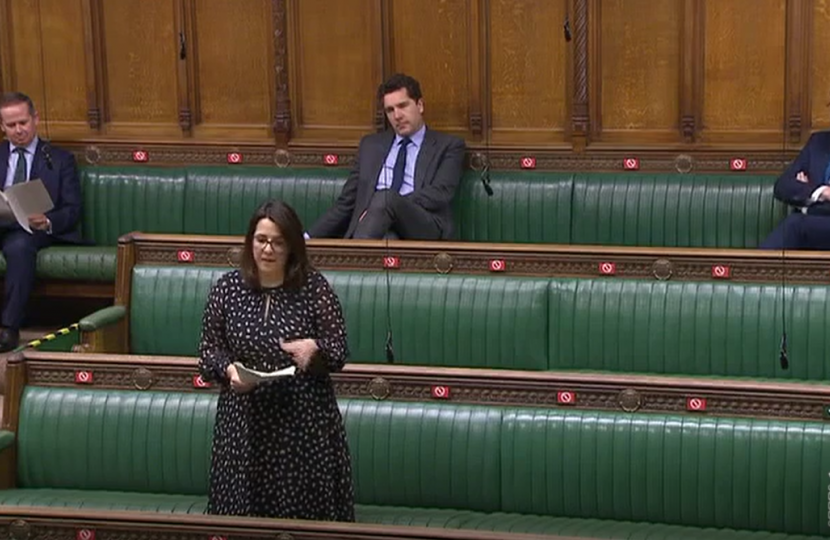 During Wales Questions on Wednesday, Miss Jones asked the Secretary of State for Wales, Simon Hart MP, about the preparation his Department was carrying out to help Welsh businesses prepare for the end of the transition period, in particular sheep farmers in Brecon and Radnorshire.

The Secretary of State for Wales stressed that the Department’s current message is to “Make sure you are prepared for the end of the transition period, whether or not we reach a negotiated outcome with the EU”. He went on to reassure Miss Jones that the UK Government is on the side of sheep farmers across the country and highlighted the UK Government’s commitment to £337 million of funding annually for Welsh farming throughout the lifetime of this Parliament.

Brecon and Radnorshire is a heavily rural constituency, with around 1000 farms and more livestock markets than supermarkets. Since her election as Member of Parliament, Miss Jones has been championing the farming sector both through her work as Parliamentary Private Secretary to the Department for Environment, Food and Rural Affairs, and most recently establishing and becoming Chair of the All Party Parliamentary Group on Farming.

“Brecon and Radnorshire is home to an enormous number of sheep farmers and having met some of them in Builth Wells at the weekend, they made clear that they do not want to be treated like a political football by those who would rather not leave the European Union at all. They are keen to embrace the changes that will come at the end of the transition period, but they want the certainty that their Government will support them come what may.

“I am delighted that the UK Government has committed to maintaining funding levels for farmers in Wales for the duration of this Parliament; as EU funding tapers off, it will be replaced with funding from the Treasury. The UK Government is on the side of our farmers, whether that is in Brecon and Radnorshire or any other constituency across the UK.”

The full exchange between Fay Jones MP and the Secretary of State for Wales can be watched here.