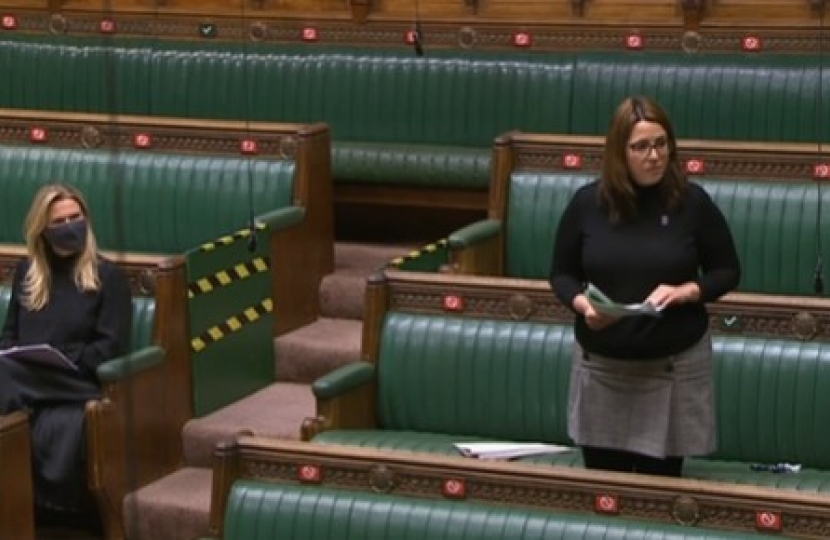 Fay Jones MP has welcomed the Domestic Abuse Bill and described it as a milestone in combatting domestic abuse, during a debate in Parliament.

The Domestic Abuse Bill will introduce a definition of domestic abuse into law for the first time. It will provide Domestic Abuse Protection Notices and Orders, which will protect those who leave an abusive relationship. It will also prohibit perpetrators of abuse from cross-examining their victims in family courts and establish a Domestic Abuse Commissioner.

Speaking in Parliament today, Miss Jones welcomed amendments made to the Domestic Abuse Bill, which will create a standalone offence of non-fatal strangulation, extend the coercive and controlling behaviour offence to post separation abuse, and criminalise threats to share intimate images.

Miss Jones took the opportunity to press the Minister for Safeguarding to criminalise cyberflashing – the unsolicited distribution of naked photos via technology, often causing the recipient to become distressed, intimidated and uncomfortable. Miss Jones explained that she was flashed on a night out in Cardiff and had she wanted, she could have had the perpetrator arrested, but had he digitally exposed himself then, it would not have been the same offence.

Following recent news reports, Miss Jones raised the experience of Ruth Dodsworth, an ITV Wales TV and weather presenter. Ms Dodsworth’s ex-husband has been sentenced to 3 years in prison following a 9-year campaign of controlling behaviour, harassment and stalking. He was verbally and physically abusive, putting a tracker on her car, following her to work and even using her hand to unlock her phone while she was sleeping so that he could search its contents.

Miss Jones said the Bill will serve to empower victims, communities, and professionals to confront and challenge domestic abuse, and to provide victims with the support they deserve. She described the Bill as “landmark legislation which will go a significant way to protecting the estimated 2.4 million victims of domestic abuse each year.”

Describing her time sitting on the Domestic Abuse Bill Committee as “an honour”, Miss Jones said that she was very proud to have played a small role in progressing the legislation.

“The Domestic Abuse Bill is a long overdue milestone. It will finally introduce a statutory definition which will extend our understanding of domestic abuse to include emotional, and economic abuse, as well as sexual and physical violence.

“This Bill has been forged by the survivors, experts and organisations who have given heartfelt and sometimes traumatic evidence, with the aim to tackle the scourge of domestic abuse and protect some of the most vulnerable in our society. I cannot thank them enough for their contributions.

“Having sat on the Domestic Abuse Bill Committee, I have heard first-hand how the Bill will transform the response to domestic abuse, help to prevent offending, protect victims and support survivors. I am immensely proud to have played a small role in its creation and I commend those, from all sides of the chamber, who have worked hard to champion the Domestic Abuse Bill.”

An all too real issue being faced across this constituency, particularly by farmers is uncertain times and in what can be a lonely profession.  I will work to ensure we have access to Mental Health services, with quick interventions and funding for long term solutions.