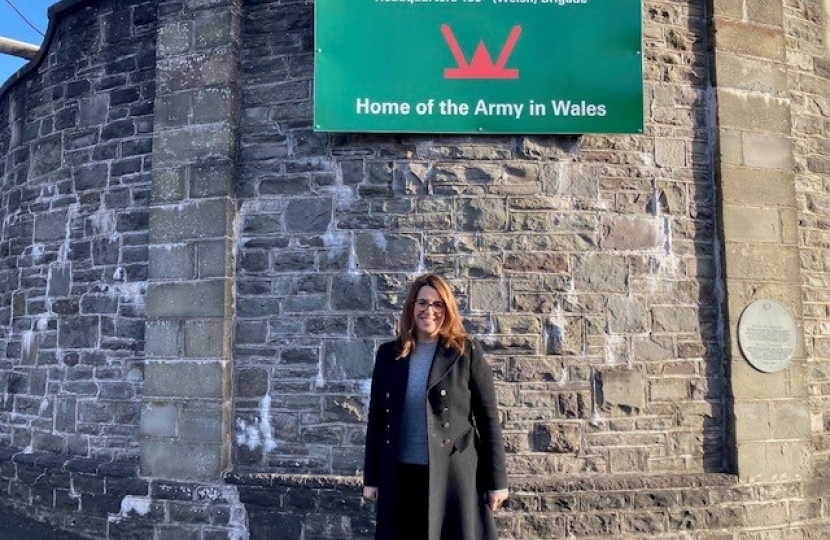 Local MP Fay Jones is celebrating the news that the plan to close Brecon Barracks in 2027 has been scrapped.

Defence Secretary Ben Wallace told the House of Commons today that after careful consideration the Ministry of Defence planned to retain the site on the Watton in Brecon.  It had been scheduled to close in 2027.

Ms Jones has led the campaign to keep the Barracks open since her election in 2019.  In January, Defence Ministers announced a partial change of mind in committing to keep Army HQ in Brecon.  Today, Ministers have gone further – scrapping plans for closure altogether.

The news was announced in the House of Commons today as part of a wider plan of investment in Army infrastructure and basing.  The plan will also see the return of a permanent Welsh regiment in Wales.  The Queens Dragoon Guards will leave Norfolk and come home to Wales – based out of Caerwent in Monmouthshire, alongside 1 Rifles.

“This is fantastic news.  I am absolutely delighted that the Barracks have been saved.

I am so glad that the Ministry of Defence agrees with me that the Barracks needs to stay.  It is not only a huge part of our history, it is operationally crucial as well.  The Army’s support during the Coronavirus pandemic in Wales has been organised from the Barracks; their crucial support has been invaluable to us all so recognising this by securing their future is essential.

Securing the Barracks for the future is an immense achievement and I want to thank everyone who put their name to the campaign.   We are extremely proud of our military community and I am overjoyed they have a permanent home in Brecon.

The fact that the QDG are coming home is the cherry on the cake. Finally, a Welsh Regiment will be based in Wales.

“Today is superb day for the Army, for Wales and above all, for Brecon.”